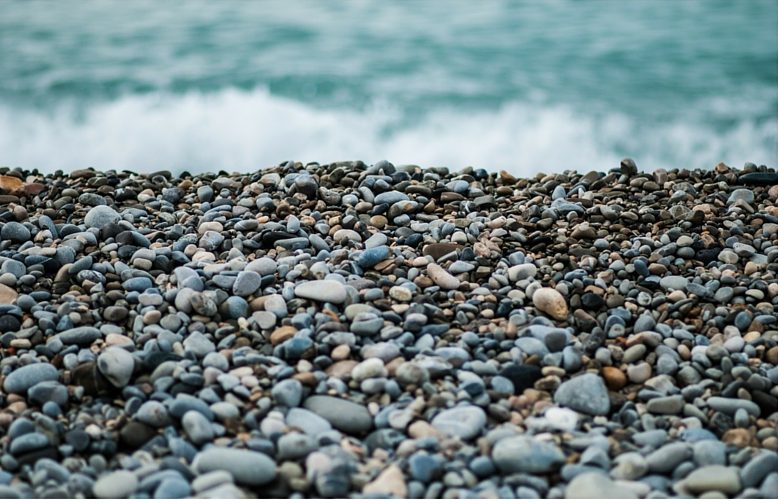 Remember when you were so scared that you wouldn’t have friends at your university? When you first go to college you’ll likely live with a roommate. They’ll be one of the first persons you meet at your school, and serve as a nice safety net for when you’re bored or have questions. My freshman year roommate experience was easy. We were both student athletes and we didn’t touch each others stuff. We helped each other clean up when the room looked like a mess. We got along well, and there were zero issues. Sometimes you’ll grow to be best friends with your roommates, or you’ll despise being with them. I have heard from a friend how she had to drop out of NYU for an entire semester because she hated her roommate so much.

This past year was a different roommate situation for me personally. I lived with one of my teammates from the track team and three different pairs of random college dorm suitemates for the entire semester. Four dudes living together with one kitchen and one bathroom/shower to share? It was disgusting.

Here’s what I would’ve done differently last year, don’t make the same mistakes I made.

FIRST PRIORITY: INTRODUCE YOURSELF AND SET SOME RULES DOWN!

The first pair of suitemates I had were in an intense Wolf of Wall Street-Esque Business Frat. Grant (my teammate) and I did an excellent job talking with each other and making sure some basic guidelines were set. We did a horrible job breaking the ice with the Frat Bros. They set up a divider in their bedroom and kept to themselves, so we assumed they knew common sense rules: cleaning, checking before having guests, not taking food…

The Frat Bros. brought home random girls every night, held parties the night before a cross country race, and used up all of our food and cooking supplies. There was zero communication going on and it was the basis for our problems.

A: Creating a group chat on the phone, Facebook, whatever get’s the job done:

B: Going right up to their face and talk to them so there’s no awkward barrier between all of you.

Obviously you should apply both options at the same time. I wish I would’ve spoken (yelled) at my suitemates more to let them know that Grant and I were on the cross/track team. I could’ve also learned more about their parties to tell them to have it somewhere else. The communication was so bad at one point that all four of us almost got written up cause we put off the roommate agreement too long. Our RA needed all of our signatures but we were all lazy to sit down together and come up with some rules. 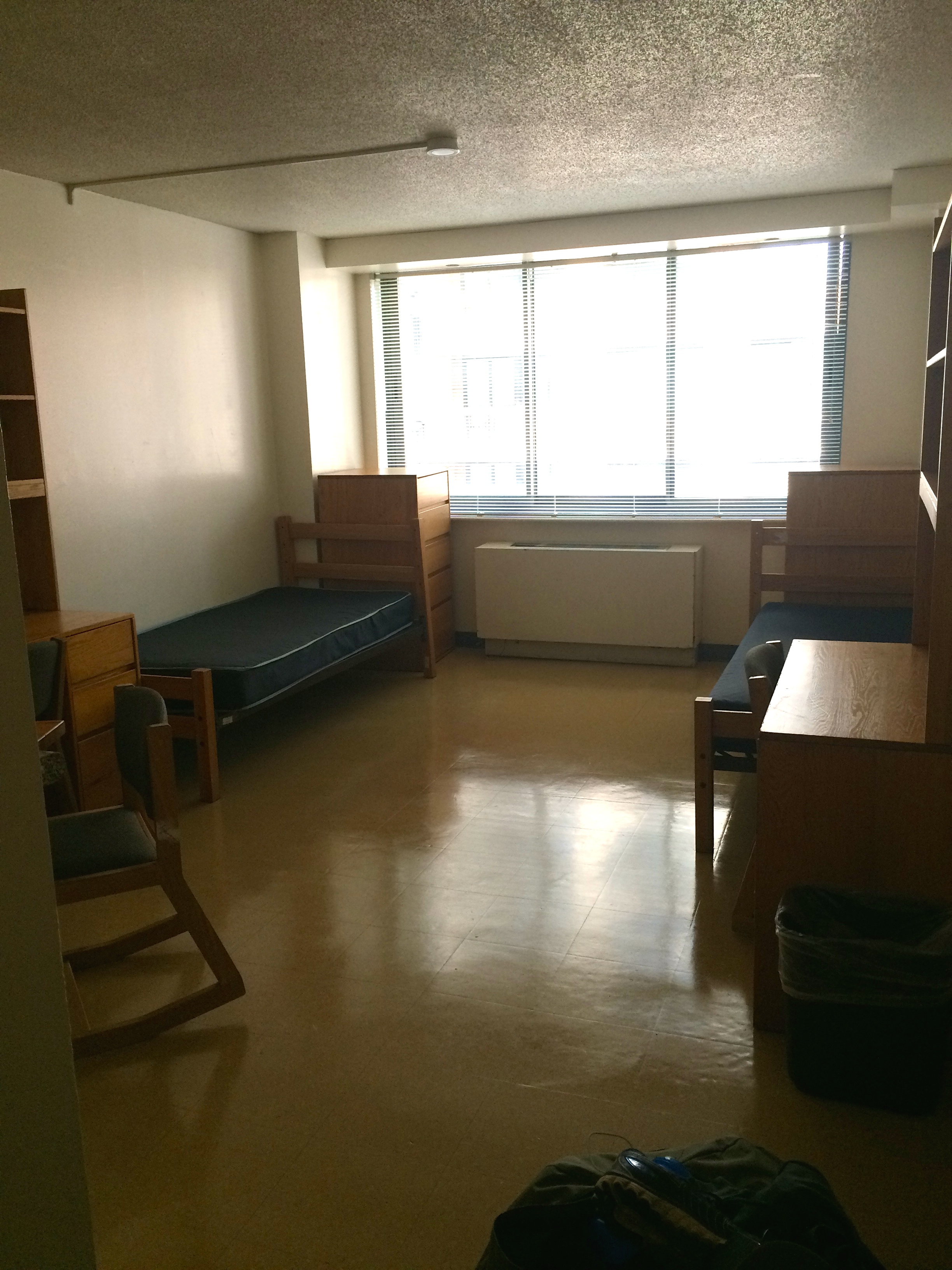 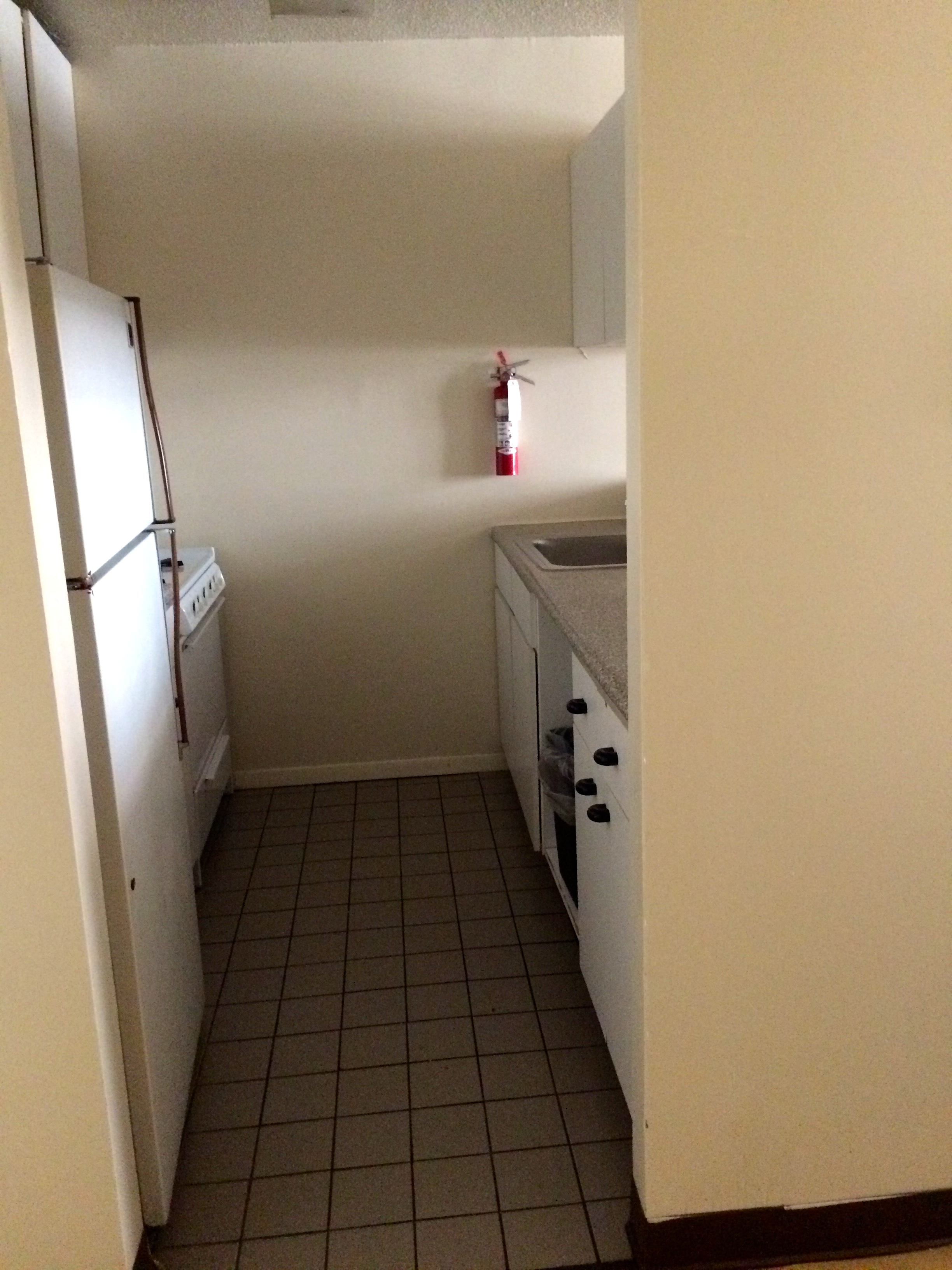 Keep your kitchen and room clean: Just like how you found it (and your bathroom of course- not pictured).

With zero communication going on and zero guidelines set, living with the Frat Bros. = gross.

At the end of the Fall Semester, our first pair of college dorm suitemates left to go study abroad in London. Our new suitemates were strangers to one another. One dude was coming back from taking a semester off in an international program, and the other just transferred to NYU.

Grant and I quickly introduced ourselves to them to avoid another fiasco. We let them know we were on the cross/track team and would need it to be quiet the night before a race. The international suitemate said he smokes and we said we didn’t care as long as he kept it out of our room.

Grant then suggested to our new suitemates that we make a cleaning schedule and give it to them. One of the suitemates laughed and thought the whole idea was silly. I mistakenly agreed with him and said “yeah let’s just all trust each other to clean up after ourselves.”

Establish a cleaning routine by:

A:  Cleaning up together whenever the suite gets messy, or parents are coming to visit.

B: Finding a fricken way to keep each other accountable to make sure you don’t live in a dump!

Just cross out Option A all together. That’s a common sense thing to do. I don’t care how you figure out the cleaning situation, whether it’s a neatly typed out Google Docs chart or telling each other to clean up after yourselves after using the kitchen…keep your suite livable at all costs!

Instead of laughing and agreeing with my suitemate thinking, “it’ll figure itself out on its own.” I should’ve called him out and said, “okay then, are you going to clean everything cause I’m not. Let’s figure this out.”

This is all common sense stuff. Don’t hide it or try to be passive aggressive about it (our third pair of college dorm suitemates posted up pissed off signs telling us to clean up the bathroom). 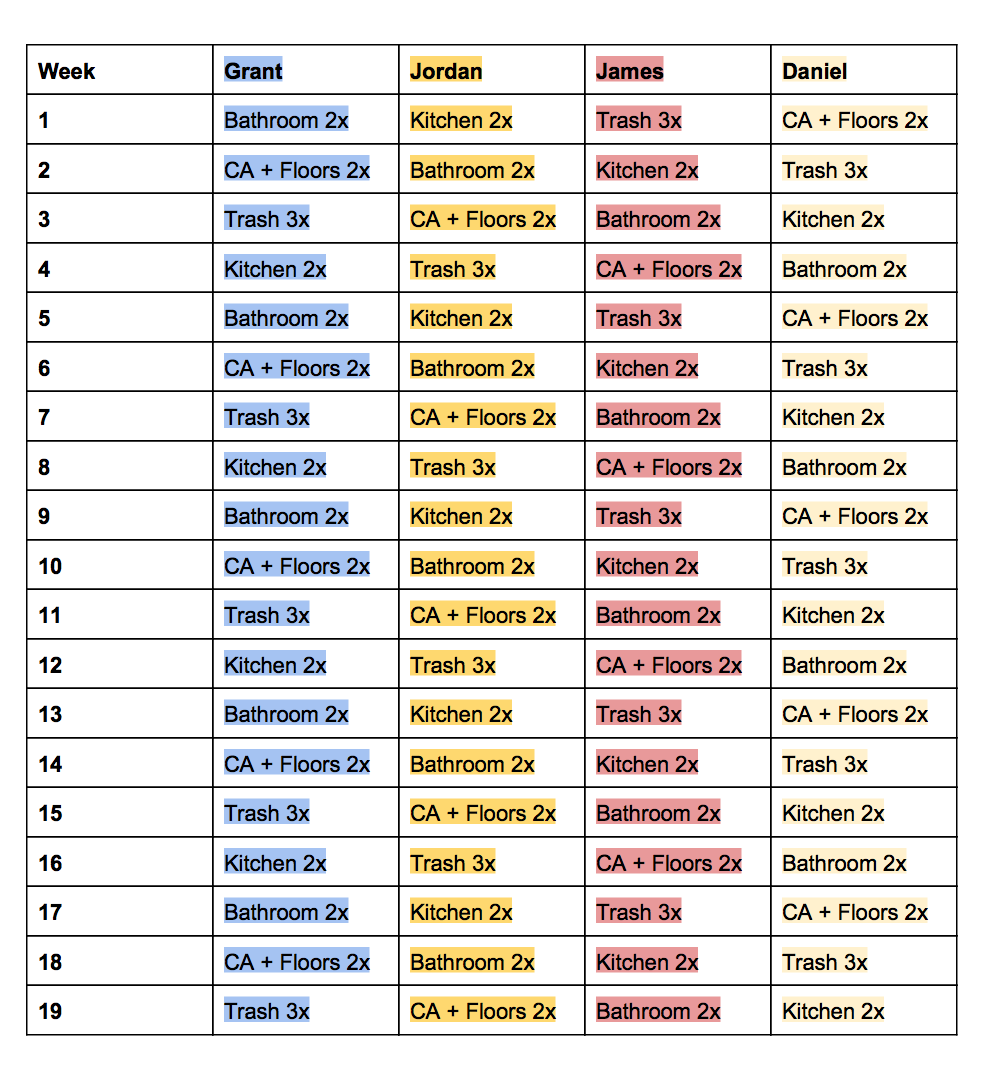 THIRD Priority: GET TO KNOW THEM MORE

After you figure out mutual rules between one another,  you can focus on getting to know more about them.  In the middle of the second semester, the international and transfer suitemates moved out for reasons still unknown (they were probably uncomfortable with each other, they both remained silent and barely interacted). We got our third pair of college dorm suitemates, two political science majors heavily involved with the school. I made the same two mistakes I made with the other pairs of suitemates, I failed to establish solid communication and a regular cleaning routine. They would sleep at odd times, and keep Grant I both up before our early practices or races. (I remember one night lying awake hearing about them argue about which ties the Presidential candidates should wear).

Frankly, I didn’t care about the fact that I had new college dorm suitemates. Since this was the third pair to live with us, I figured they would eventually leave. I didn’t put any effort to get to know them more.

There isn’t any option, just talk to them more so you eventually become decent acquaintances at the very least!

There was a strong reason for why I was comfortable living with Grant. We were both teammates, we understood our priorities and schedules. Grant put in the effort to get to know our suitemates. He talked with them mostly about the Presidential election, but he found out other facts about them. (One of the suitemates got 1k a week from his parents/they both lived in a college dorm with room service before living with us).

Think about it, when you’re comfortable with someone you’re not super awkward around them. You’ll be blunt when something that bothers you comes up. You’ll both work together to clean up when someone important is visiting (like parents).

These were the priorities I wish I would’ve attacked with my college dorm suitemates. Thankfully, I had the experience of living with three different pairs to analyze my mistakes. To summarize: TAKE CARE OF BUSINESS THEN GO HANG OUT. Don’t make the same mistakes I made. You should head back after a long day to a college dorm you want to be in. Don’t waste all of that housing money on something you hate! 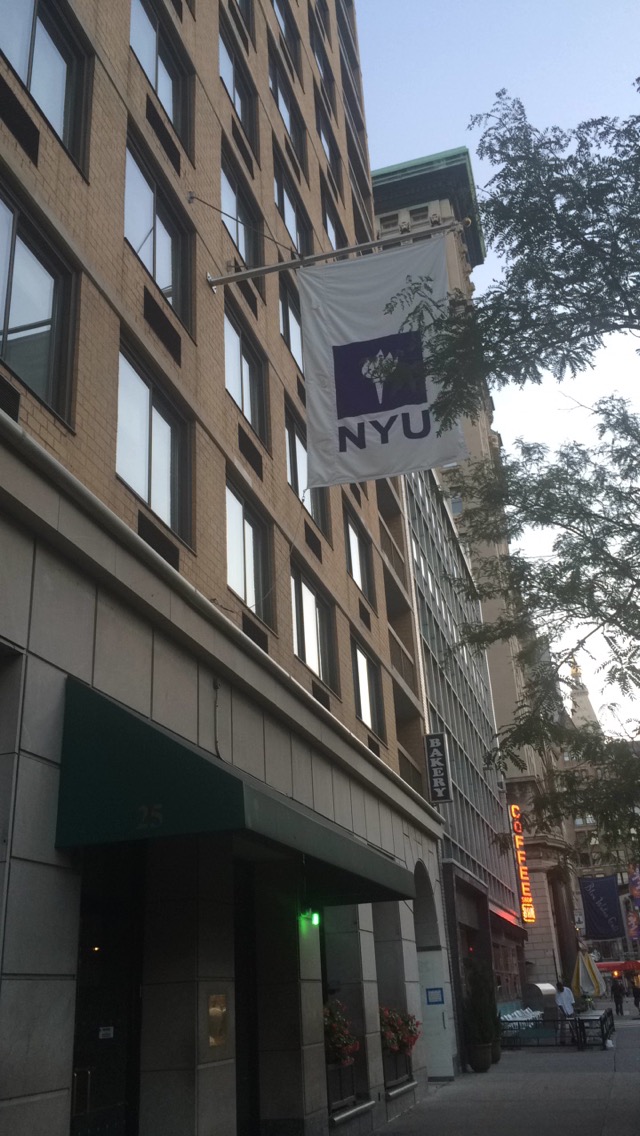