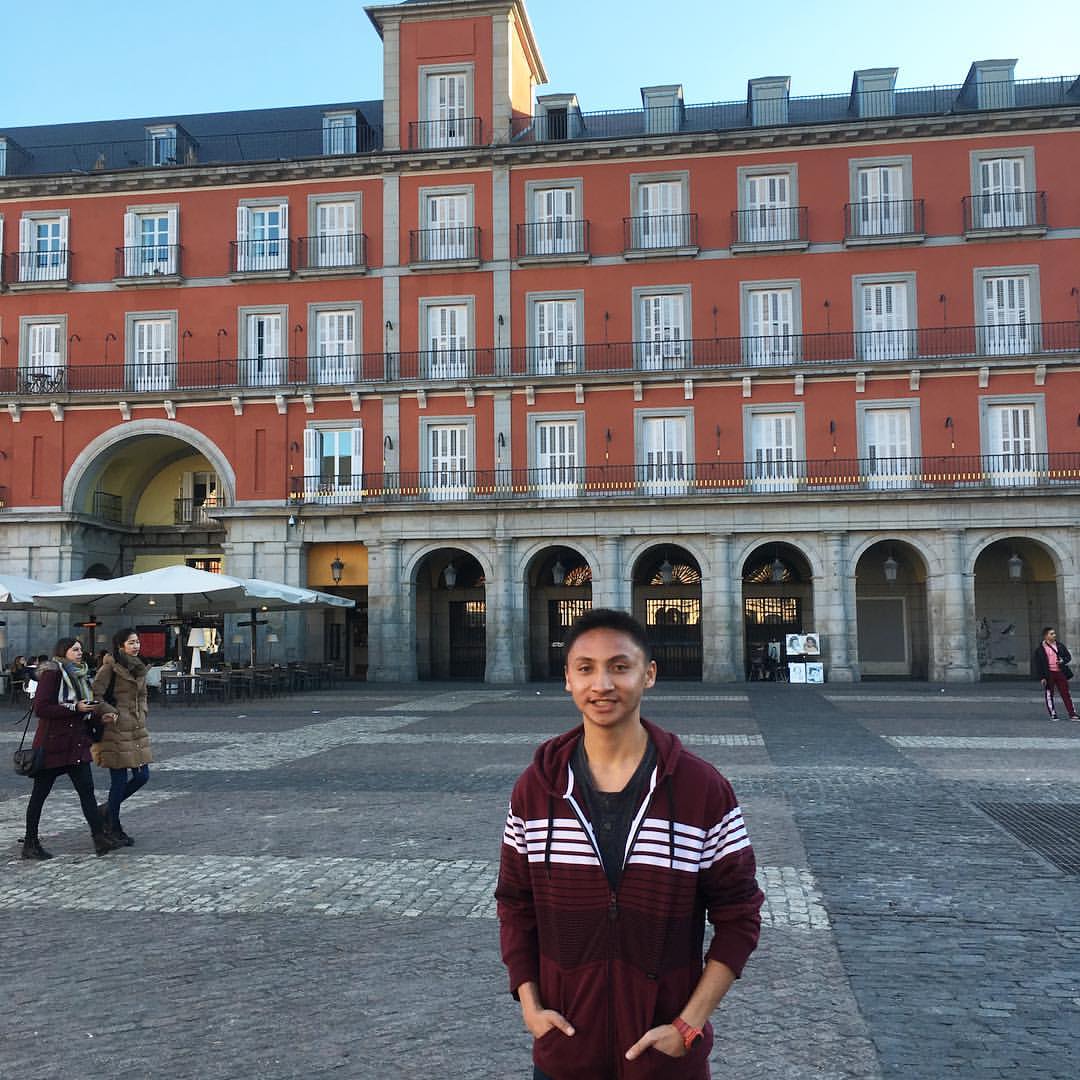 I’ve seen this place before. This was where Erica took a picture during her summer trip to Madrid for a language exchange program. In high school, I knew she would visit Spain every now and then. I never thought I would follow her footsteps. This was the location where the YouTube tour guide was warning about being a tourist trap; I could understand why now. To the right was a fat man dressed up in a Spiderman costume yelling at tourists to come take a picture with him (for an undisclosed price of course.) Erica warned me that people will dress up as superheroes and cartoons only to interrupt tourists. Towards the center however was a statue of King Felipe III, and this was where our NYU tour group had to meet. 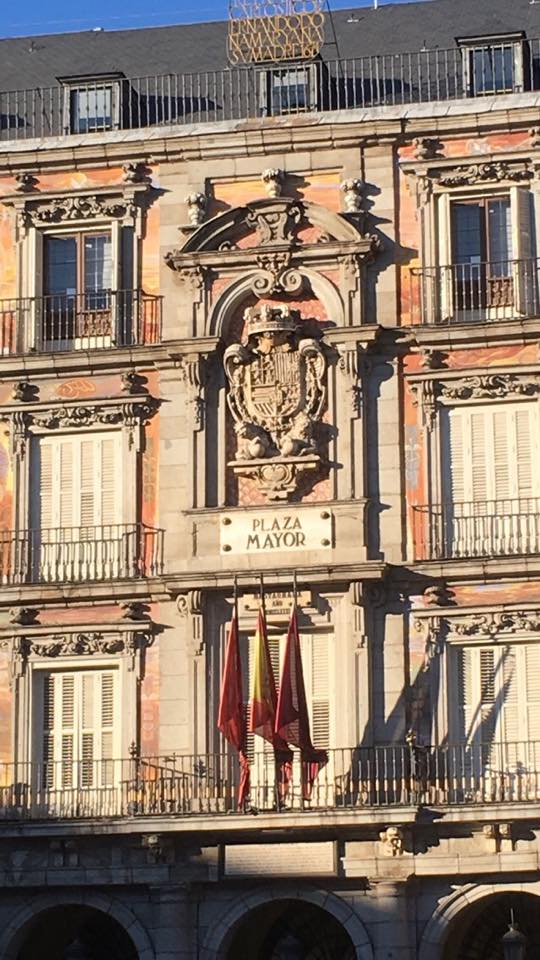 The space was wide and I immediately tried to capture the same picture that Erica took when she was in Madrid. Our tour guide had a sick grey mustache and hat. He introduced the Plaza Mayor as a “first love…” and instructed us to put our phones away because they would distract us from immersing ourselves into the experience.

Visit Spain? No, I had a chance to learn about my new home. This was the ideal spot to meet up for my first official tour around Madrid. I felt bad for the old man because our group kept on being noisy and talking over him. We were all just excited to be in our new country. Others were genuinely trying to listen in…we were in Spain for crying out loud! This was some people’s first time in Europe and we get to start it off right in the center of Spain’s capital. 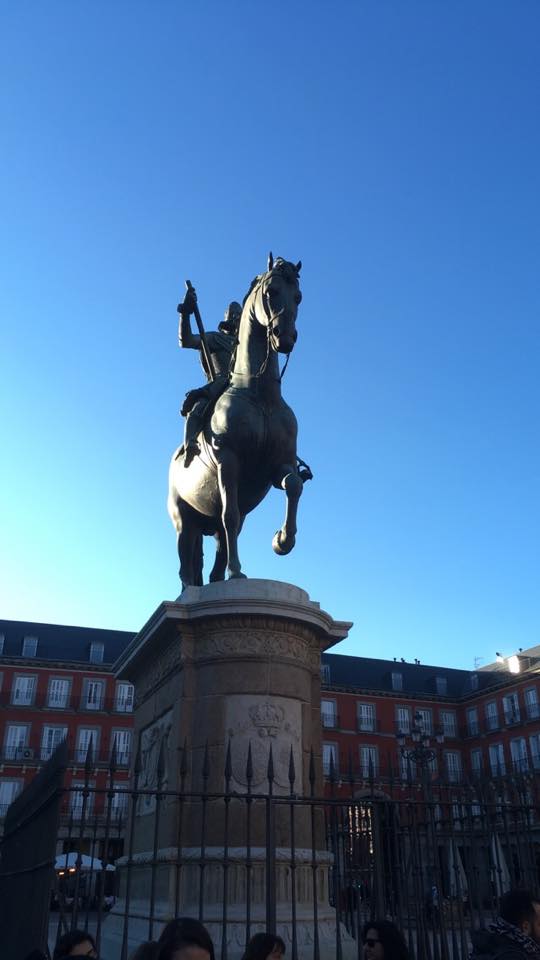 I faced Sam and handed him my phone for a picture… 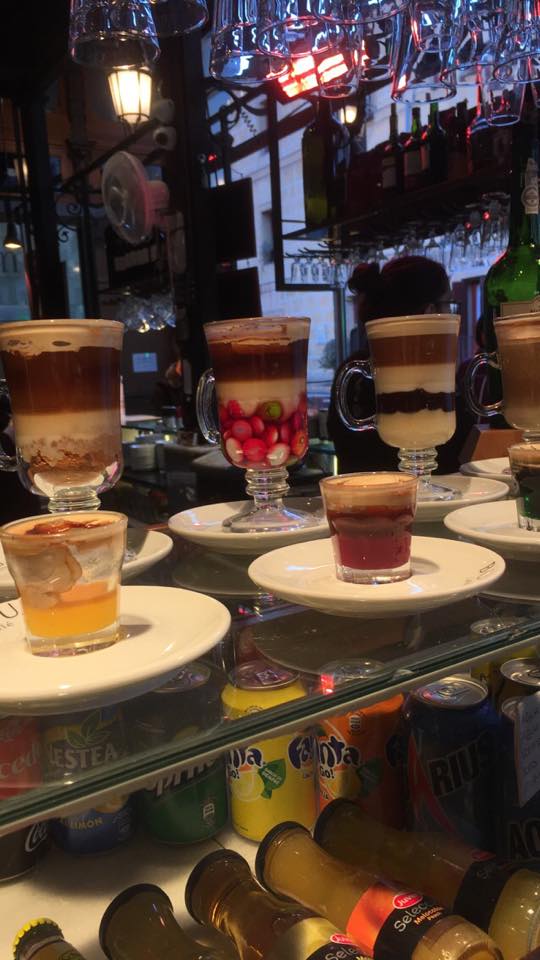 The glass exterior stretches around us. From the outside looking in, it just looks like another tourist trap filled with over priced knick knacks to buy. If you visit Spain and come across Plaza Mayor, you’ll find yourself in this famous market. When I walk in I feel myself enveloped by the Spanish culture. I take that back, this was just a taste of the new country I’ll immerse myself in. It was a super market, just like any other we have back in the States, but the old man informed us that “the people actually talk.” I didn’t understand.

I broke off from my group and started to notice how “the people actually talk.” Strangers coming up to engage in meaningful conversation, instead of a cheap exchange about which aisle to head down to for drinks. As an observer, I see the perspective of new tourists (like me) walking around silent and wide eyed. Simultaneously they reach for their iPhone to add another picture of their adventures in the foreign land. There’s a mixture of  different languages aside from English and Spanish heard around the market.

I glance over the postcards and remind myself again that I’m not in America. It feels like I’ve been in Madrid already for 6 months, but it’s barely been 5 days and in reality I’ll only be here for a little over 4 months.

That was a long 15 minute break at the market. Time to head back to continue the tour. 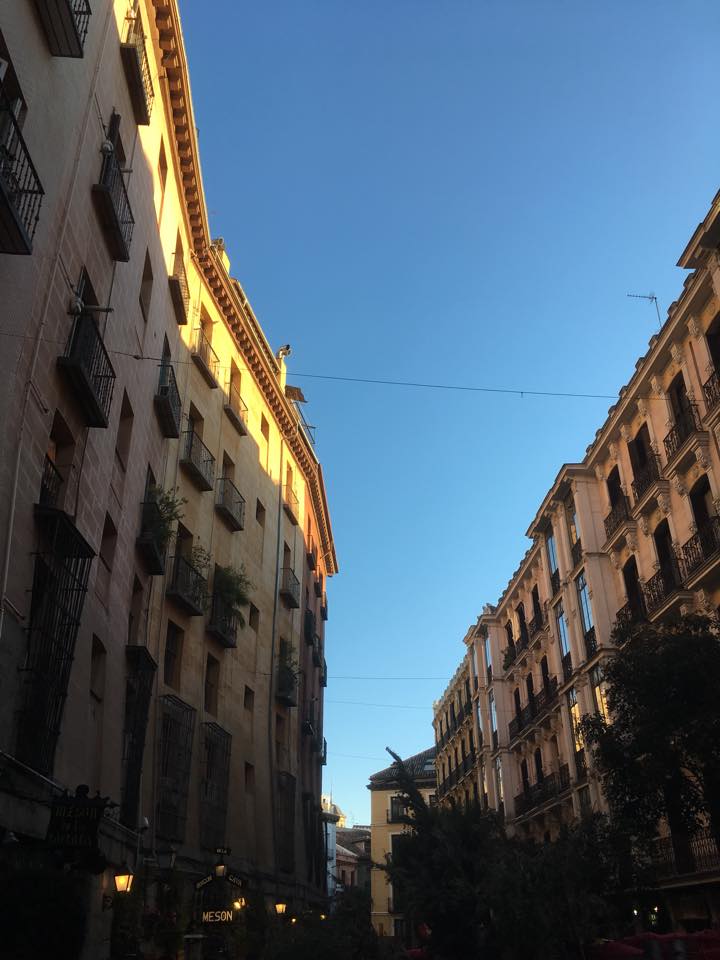 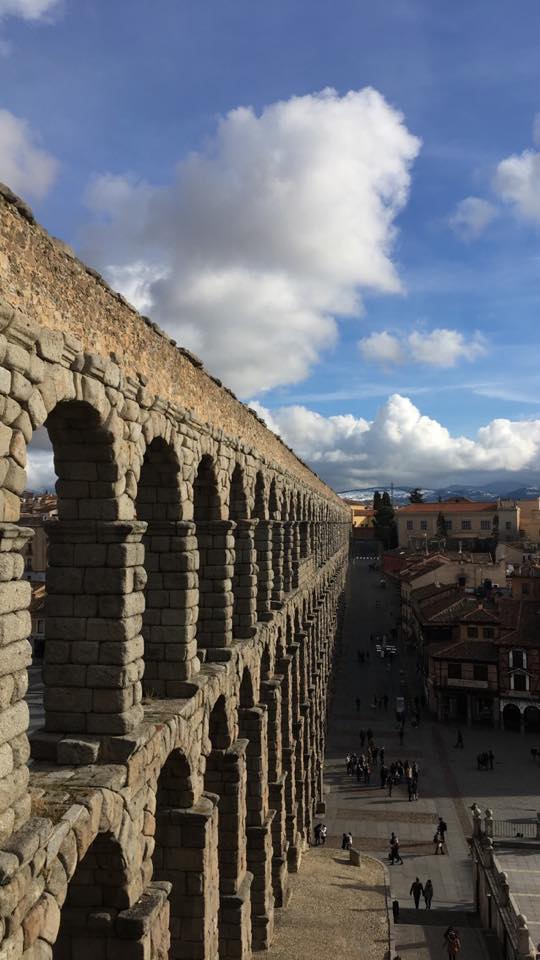 I’m still sick. I slept on the bus ride over here to recover from the drinks, jet lag, and new cuisine. I was tempted to just stay home but I saw that there was a new city we’d all explore. If you visit Spain, you’ll be told to check out Segovia.

The first image that appeared on my screen when I searched up Segovia were its well renowned ancient Roman Aqua Ducts. Likewise, the first sight I saw as I slowly stepped off of the bus were the incredible Aqueducts. Moving up closer to the sight we see a plaza of selfie sticks and iPhones being handed over to friends and strangers to snap a picture. 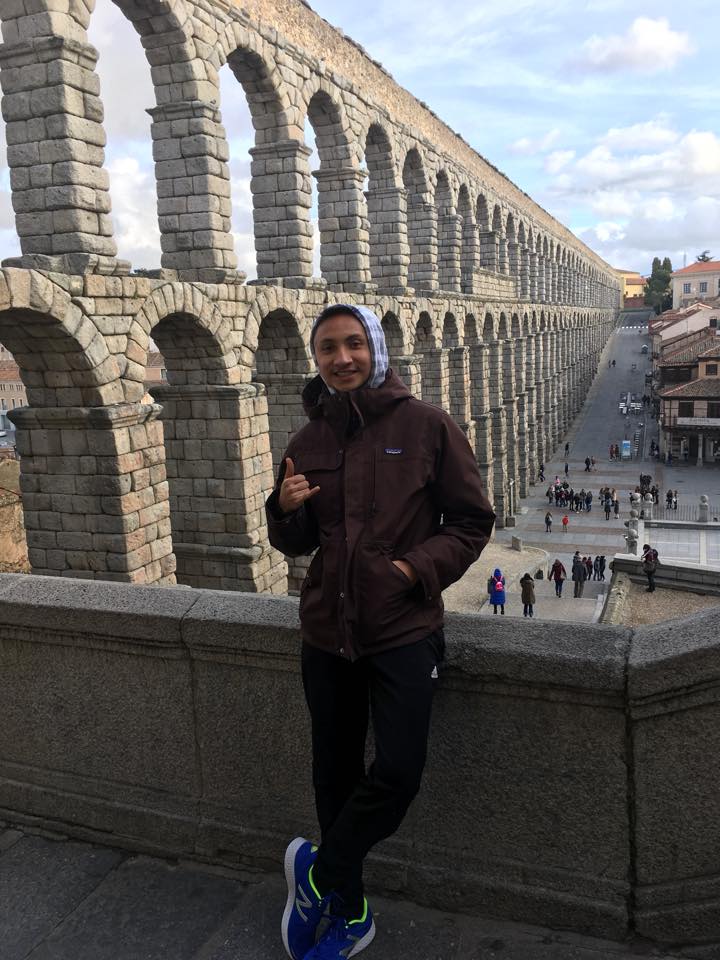 The arching stones and size of the spectacle leave our group in awe. The ancient architecture stretches across the city of Segovia and appears to curve up near the side of the frosted mountains. Like everyone else I want to take my time and enjoy every moment of the scene…what?! We’re moving already????

Don’t worry we’ll have two hours of free time at the end of the tour. It’ll be spent here. I feel a little bit better as I move forward, but not really. 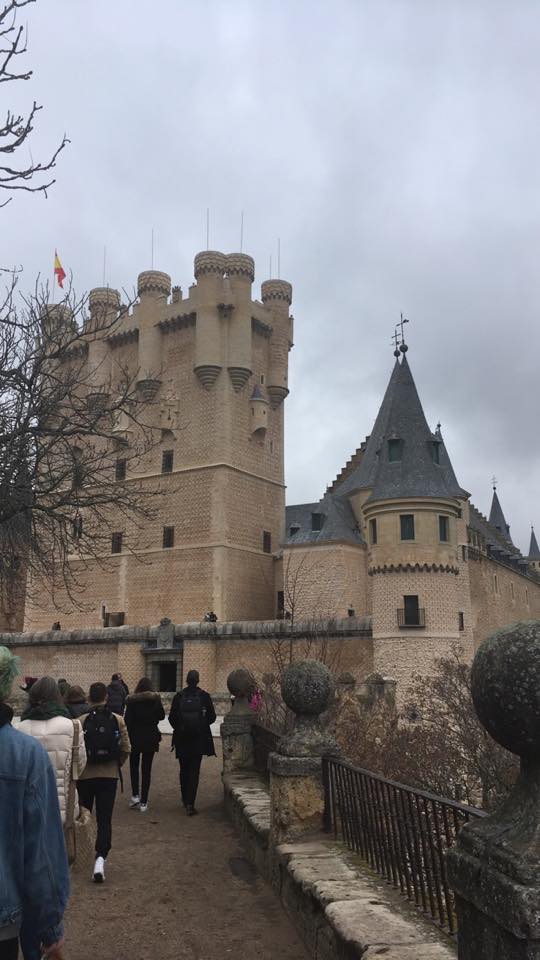 I remember seeing this picture when I reviewed Kristine’s blog. Walt Disney? Yes of course. The root of inspiration for the famous landmark castle is right here.

Over the ledge of the castle there’s a moat. Nothing to see here. If I walk inside will I be as struck as how the castle looks from the outside? I’ll be warmer, that’s for sure.

During the tour Chhete responded to the question “which style of architecture is this palace designed in…?” To which he responded with “Games of Thrones-Esque” I was probably one of the few people who heard the joke. The tour guide briefly heard it but she moved us along again for the lecture.

Will I ever be here again? My stay here in Madrid is not just a “visit Spain for a few days and then head back home” chapter in my life, I’m here for the entire semester. Will I live here in the future? Nobody knows.  This is what rings through my mind the moment I enter a new location in Spain. The picture will last, and my writing will keep the flames alive.